10 Reasons to Grow Your Own Brussel Sprouts 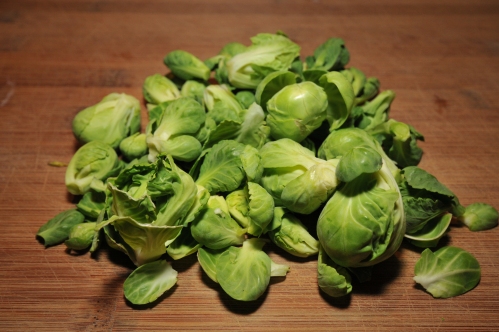 About two months ago my husband and I indulged ourselves on our homegrown Brussel sprouts. We grew two plants in a pot on our deck, and we harvested them over a series of weeks in the spring. By the end of the season we’d grown enough sprouts to cook with them four separate times even though our plants were relatively small compared to those grown in an actual garden bed (as opposed to containers).

Even after we’d eaten all the sprouts, the plants maintained a striking presence on our deck. As the temperature increased the plants started to bolt and the new sprout buds went to flower – gorgeous golden yellow flowers. Our two plants got so big and bright we could spot them from several blocks away! 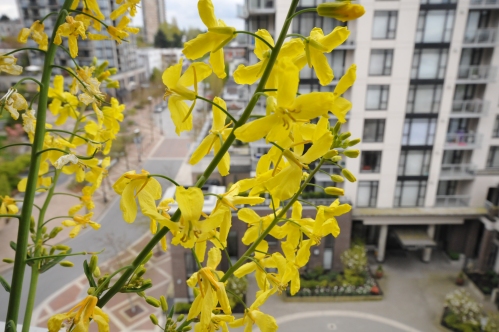 I enjoyed growing Brussel sprouts so much throughout last fall, winter and spring that I’ve committed to growing them again this year. I just put two seeds into some dirt tonight, actually.

If you’re thinking of growing Brussel sprouts yourself, here are 10 reasons why you should go for it:

1. Brussel sprouts are good for you! They’re loaded with vitamin A, folacin, potassium and calcium, and they’re high in fiber and low in fat and calories. They also contain phytochemicals that may protect against certain cancers.

2. Brussel sprouts are relatively easy and cheap to grow. The plants are super hardy by nature since they grow through the cold months of the year, and there isn’t much cost to growing them yourself. All you need is a pot, some dirt, a couple of seeds and some water. Nothing too fancy.

3. Freshly picked Brussel sprouts taste WAY better than anything store bought or, dare I say, frozen. We actually did a taste test to compare our green gems to their frozen counterparts and the difference was impressive. Ours were crisp and fresh and had a slight sweetness mixed into their bitter taste. The frozen ones looked pretty pathetic by comparison, and they tasted about as good as they looked: mushy, starkly bitter and generally unsatisfying. 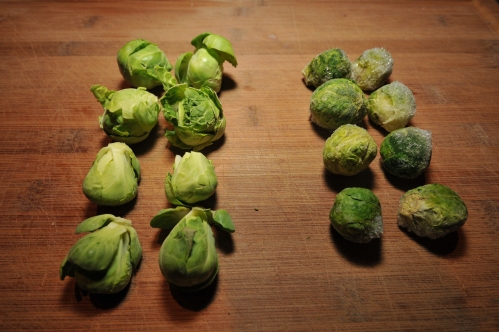 4. Your own sprouts will have a much lower carbon footprint than anything you buy from a store. Think about all those transportation miles you’re eliminating.

5. It’s fun to watch the plants grow and change, especially once the sprouts start to form in the fall.

6. Come wintertime your friends, family and neighbours will be impressed to see that you still have plants growing in your garden even though it’s snowy and cold. 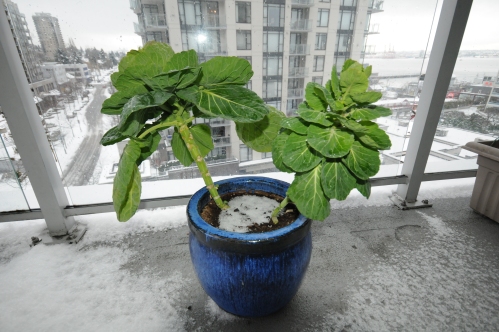 7. By growing your own Brussel sprouts you can ensure that you grow them organically, if you wish.

8. Even after you’ve eaten the sprouts and the towering stalk starts to bolt, it will continue to impress you with it’s abundance of golden yellow flowers for weeks.

9. It’s a general rule that everything tastes better if you’ve put some effort into it. After you’ve nurtured your plants through several seasons, your first bite of crisp Brussel will delight you more than you might realize.

10. Above all else, you’ll make your mother proud. Every mother wants their children to eat their vegetables, and if you had any sort of childhood aversion to Brussel sprouts I guarantee the best way to get over it is to grow some delicious fresh ones for yourself. You won’t be disappointed!

4 responses to “10 Reasons to Grow Your Own Brussel Sprouts”